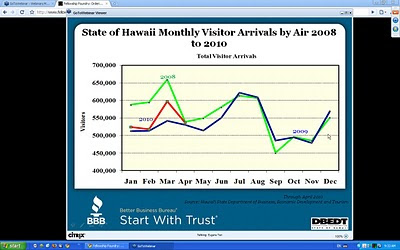 In a Webinar I attended today, put on by the Better Business Bureau, the consensus was that, although slow, the major economic indicators show that there is an upturn that will continue in 2011. Visitor arrivals were down beginning in April 2008 and continuing in 2009 partly due to the folding of ATA and Aloha Airlines due to the high price of fuel and causing high prices while still making a loss of millions of dollars for the airlines.
Although sold seats for the rest of the year 2010 show an increase in visitor arrivals through the fall of 2010. It was bad enough that visitor arrivals have been down for the past few years, visitor spending was also way down during that period. From a high of over $12,000 in 2007 to a low spending of less than $10,000 in 2009. The good news is that projected visitor spending is expected to increase in 2010 and 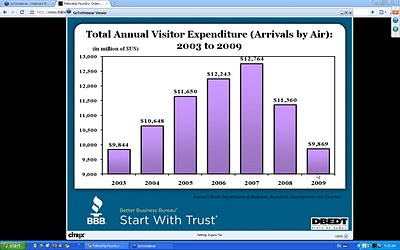 2011 partly due to increased visits from Japan and a 50% increase from other Asia countries including Taiwan, Hong Kong, Singapore & China. Japanese tourists postponed their vacations in 2009 to 2010, so from -5.6% decrease in 2009, we expect a +3.5% increase in 2010.
We are expecting that the economy of Hawaii will show a steady increase in the coming years. The downturn caused many in the wedding industry to close up shop in 2009, but those who could weather the storm will be rewarded beginning in 2010. Although it's too early to tell how much, and it may take some time before we see the figures we saw in the hay-days of 2005-2007, we are expecting a positive note or the first time in a few years.
Email Post