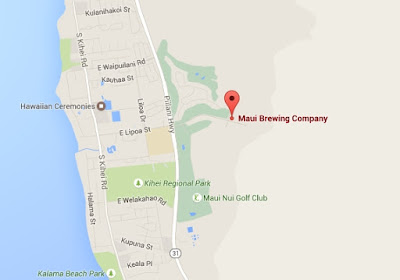 I had heard that the Maui Brewing Company was open in Kihei and was now renting their unique space out for wedding receptions. I know some of my friends had gone there to experience their tasting room, where they have 29 different beers that they make there. Their reception space is indoors and outdoors and can accommodate over 100 people. They plan, in about 2 and a half years, to incorporate a restaurant in their indoor space, which is quite large. I know that this place, which is popular with the 30's crowd, is becoming the new hot spot for happy hour. Since they don't serve food, a variety of food trucks are scheduled and there are two different food vendors each day. The first comes when they open at 11 am and stays till 5 pm, when another arrives and takes care of the night crowd. Nightly music from different groups keeps the party going after 5 pm. The funny thing is that there are no signs on the building and it's located in the Kihei Business & Tech Park.  I'm not sure how they advertise, but if your didn't know where it was you would never find it.

I arrived shortly after 3:30 pm because I wanted to speak with the tasting room manager about an event we were planning for September. I met with Carrie Adelmann, who was very nice and open to sponsoring our event. I was surprised how laid-back the whole place was. Rustic tables and chairs made from rough-cut timbers adorn the lobby area, which opens into a spacious bar area, where a 20 foot bar is set up with 29 flavors of the micro brewery beers waiting to be poured. Each beer was presented with it's own unique glass. They also offer a 6 pack "plank" of a variety of beers for tasting for around $15. I was told that it was happy hour and that any full glass of beer would be just $5 (normally $6). They do not serve wine or other beverages. They will also let you taste the beer before you buy it to make sure it's what you want.

Since they don't have a restaurant yet, they very cleverly have arranged for every food truck in the area to have it's chance at the patrons of the tasting room. Today it was Outrigger Pizza's chance and they were busy putting out designer flat-bread pizzas two at a time at $10 each,  You could see that Matt, the pizza guy, was busy making and cooking pizzas in his one-of-a-kind pizza oven on a trailer. The pizza looked delicious, but I was waiting till 5 pm when the Three's Restaurant food truck took over. I had the kalua pork quesadilla, at $9, which I would highly recommend and thoroughly enjoyed along with my beer choice at the time which was Kihei Kolsch: 5.2% ABV, 42 IBUs, a brew that they had made just for this location!


I sat outside on their patio area which had seating for 40. Around 4:30 the band arrives. Today it was a duo of acoustic singer / guitarists who play a sort of Southern country, bluegrass, folk song music, all of their own songs I assumed.  Sweet Beats & Yum Yum, they call themselves. I spoke with Yum Yum, Matthew, and gave him my card. He didn't have a card and said that they didn't have a website, but that they could be found on Facebook. I found this online about them:

It looks like they have played at Charlie's in Paia and at Polly's in Makawao. They were quite entertaining and I would be happy to see them again. For private parties, call Carrie at  808.213.3002, http://mauibrewingco.com/ 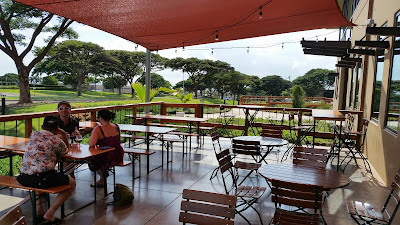 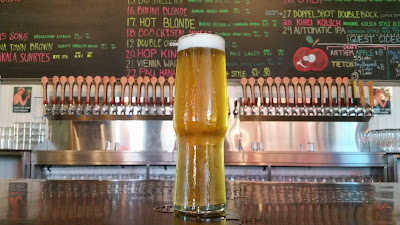 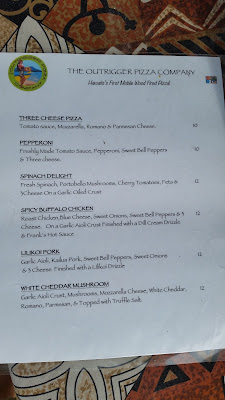 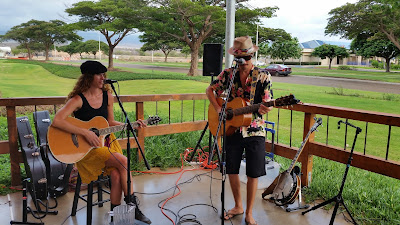 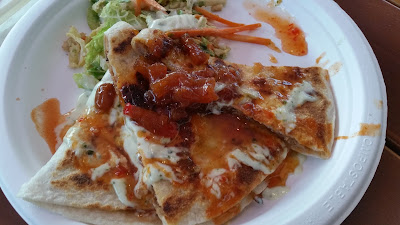