(Reprinted from www.giftypedia.com/ with photography by Hawaiian Island Weddings)


There are many traditions and superstitions that have become a part of wedding ceremonies. Many are so old that their origins are not easily traced and the interpretation has been altered over the centuries to work with the times. Some of these wedding traditions are related to culture and beliefs, and many, if not all, are related to luck in the marriage, health, wealth and happiness. In fact, these traditions are so well-known that popular bridal shower games have been derived from them. As the traditional wedding vows say…

From the time the couple gets engaged and the ring is placed on her finger, the superstitions and traditions begin. 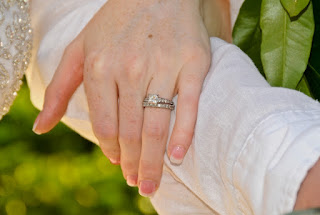 With that the future bride should not allow anyone to try on her ring, especially a "female friend." Superstition has it that she will steal your fiancé if you allow her to try on your ring.

During the Middle Ages, an exchange of rings and a promise constituted a legal marriage. This custom was manipulated by monarchs to their advantage to remove themselves of an unwanted spouse. This led to the custom of two rings - one for the engagement and one for the wedding.
It is said that the engagement ring and the wedding ring is worn on the fourth finger from on the left hand because it was once believed that a vein in that finger lead directly to the heart.
A diamond engagement ring was given by Medieval Italians in the belief that the diamond was created in the Flames of Love.

The earliest evidence of wedding rings dates back to around 2800 B.C. in Egypt. In 860 the Roman Catholic pope (Nicholas I) declared that an engagement ring was required of all those who intended to marry.
The never-ending circle of a wedding band symbolizes eternity because it has no beginning or end. This tradition grew out of an ancient tribal custom of using circlets of grass to decorate a bride's wrist and ankles.
Early Celtic wedding rings were made of hair. The bride and groom would weave locks of their hair together into a braid and the bride would wear the ring as a token of their commitment.
The Claddagh ring is considered the traditional Irish wedding band. It was originally a puzzle ring in three parts. The first part of the ring was given to the bride as her engagement ring. The second and third parts of the ring were kept by the groom-to-be and the witness of the engagement ceremony. At the marriage ceremony, all three parts would be reunited on the bride's finger.
The Puritans renounced wedding bands because they considered jewelry frivolous. Colonial Americans often exchanged thimbles during the wedding ceremony because they were considered practical.. Later, the woman could slice off the bottom of the thimble to create a wedding band.

Traditionally, the wedding dress has not always been white. Anne of Brittany made the white wedding dress a popular to the upper social classes in 1499. Before that, a woman just wore her best dress. 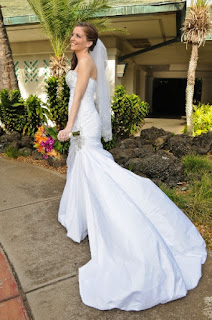 The modern wedding dress tradition says that the white dress symbolizes the purity of the bride. Queen Victoria started the modern tradition of wearing white in 1840 when she married her cousin, Albert of Saxe-Coburg.

There is an interesting old poem about the superstitions surrounding the color of a wedding dress... 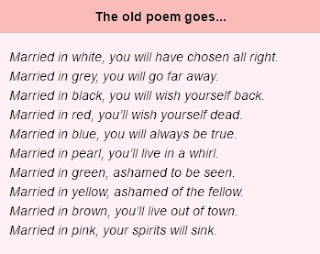 Wearing a veil to cover the face is said to confuse any evil spirits that may be lurking around on this day. As with the bridesmaids, they are to surround the bride as to confuse the evil spirits as to who is the actual bride. Lifting the veil is symbolic of the bride leaving her father's household and officially joining her husband's home.

The old rhyme...
Something old, something new, something borrowed,
something blue and a sixpence in your shoe.
... is a tradition that is commonly practiced today[5].

The superstitions surrounding the date on which the wedding ceremony takes place is related to the full moon. It is said that a wedding should take place the day of a full moon. Many weddings take place in June. It is said that in June on the day of the full moon is most prosperous and long lasting union of all.
What day of week should you be married? The most common day of the week for weddings is Saturday, as it's more convenient for guests, but there is a superstition that stems from English folklore about what day to get married.
There are also superstitions about the month you choose for a wedding, certain months were believed to be better than others. 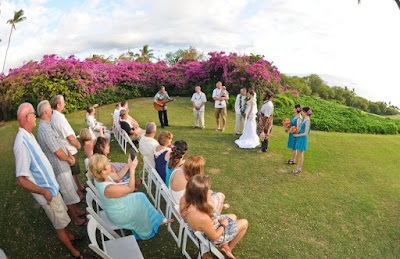 
The bride is on the left and the groom on the right is from weddings of long ago. In the event the groom needed to protect his bride from intruders (today they are called wedding crashers) he needed his right side to be free so that he could grab his sword.
The first kiss between the bride and groom at the end of the ceremony symbolizes the swapping of souls.
The tradition of throwing rice at the couple as they leave the church is to bestow prosperity and fertility on the couple. It has recently been thought that the rice posed a danger to wildlife, so some couples replace the rice with bird seed or other types of eco-friendly substances like confetti.

Below are a few superstitions related to the day of the wedding, before the wedding ceremony...
§         It is commonly believed that the groom should not see the bride-to-be on the day of the wedding before she starts her walk down the aisle.
§         It is considered to be good luck for the bride to take once last look in the mirror before going to the ceremony. Though, many say that she should not be in her full wedding attire when doing so. Many recommend that she leaves off something minor, like a flower or a pin, while taking the one last look. Then, she can put that on on her way out.
§         Once she has taken the last look in the mirror, it is said to be very bad luck for her to come back and recheck herself.

History of the Wedding Cake

The wedding cake tradition is almost 2 thousand years old. The Romans baked a small loaf of bread. The groom would eat part of a loaf and break the rest over the bride's head.
In Medieval England, guests would bring small loaves of bread that were piled in front of the couple, who then attempted to kiss each other over the pile.
The tradition of the couple making the first cut into the wedding cake  symbolizes their shared futures. 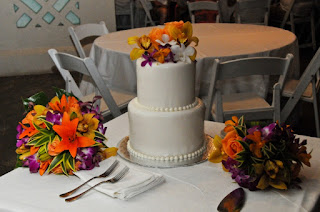 A fairly recent tradition, dating back to the early 19th century, is to save the top tier of the wedding cake and eat it on the first wedding anniversary. Originally the newlyweds ate the top tier to celebrate the christening of their first-born, not their first anniversary.


History of Throwing Things at Weddings 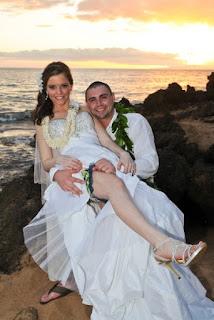 
Gift Giving for a Wedding

The giving of wedding gifts has been a long tradition in the history of marriage. Originally, couples were showered with symbols of fidelity, fertility, and prosperity. This superstition has evolved into today's commonplace practice of creating a bridal registry complete with a list of items wanted by the bride and groom.

Carrying the Bride Over the Threshold

There are several superstitions that involve the custom of the bride being carried over the threshold by the groom. One of these superstitions was started by the Romans, the as they believed it was to make sure that the bride didn't stumble and bring the newlyweds bad luck. Another derives from an ancient belief that the newly married couple was very susceptible to evil spirits, and the groom carrying the bride over the threshold would protect her from evil spirits lurking below. Another variation is that in the past it was considered lady-like for the new bride to be resistant, or at least appear to be resistant to "give herself away" to her new husband. When the newly married couple would reach the threshold to their bridal chamber, the groom would carry the bride over the threshold to encourage her to go in.