Rev. Keoki Sousa is our newest Hawaiian Minister in Maui. Rev. Sousa will perform a religious Hawaiian ceremony or a non religious ceremony. He will begin your ceremony with the Oli "Aloha: Hawaiian Welcoming Chant". His touching ceremony, mild mannor, and "Aloha Spirit" will make him a welcomed addition to our Hawaiian ministers in Maui. Here is some historty about Keoki. 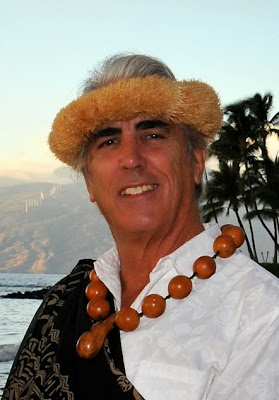 Well-known kupuna Keoki Sousa was born on Oahu ten months after the start of W.W.II, Sousa was punahele (favored grandchild) to his kupunakane (grandfather), who taught him his Hawaiian values and language, albeit secretly.

After the war, his family moved from Pearl Harbor to the Mainland. He worked as an independent educational consultant for more than 20 years before returning to Hawaii.

Upon returning home in 1989, he became involved in relearning the culture of his ancestors, including the study of ka hula (dance), Hawaiian language, and traditional healing practices.

He was chosen by his kupuna of Kahuna La’au Lapa’au O Maui Inc., a nonprofit organization dedicated to the perpetuation of traditional Hawaiian healing values and practices, to be their ho’opa’a a’o hana (apprentice) and club president from 1992 until the death in 1999 of his kumu and mentor, the Rev. Kahu David Kawika Ka’alakea, who was a kahuna la’au lapa’au and kahuna pule.

Upon his death, Papa Ka’alakea told Keoki to “holomua ka la’au lapa’au” – to continue the teaching and practice of traditional Hawaiian healing.

Since 1994, Sousa has been an instructor in Hawaiian culture and history in the Elderhostel program through Hawaii Pacific University.

He has also taught courses through the PACE program at Maui Community College, including “Ho’oponopono,” “Sacred Sites of Maui,” “Medicine At Your Feet: La’au Lapa’au,” and Holodynamics, and conducts historical walking tours of Lahaina for the Friends of Moku’ula Inc.

The He U’i Cultural Workshops are supported by a grant from the county Office of Economic Development and the Hawaii Tourism Authority.